APAC was crucial to the formation of an Asian Pacific American influenced district in San Diego, in line with keeping communities of interest together, back in 2010-2011.  Redistricting is an important issue for our community, and it will be reappearing as an issue for consideration in 2020-2021.

The City of San Diego’s website offers an opportunity to help shape our communities by drawing the city council lines.

More information can be found at www.sandiego.gov/city-clerk/redistricting-commission.

Redistricting is the process of redrawing the City Council district boundaries every 10 years following the Federal Decennial Census. The redrawing of district boundaries is designed to ensure that local legislatures are representative of the City’s population. How and where districts are drawn can shape a community’s ability to elect the representative of their choice. The districts are used for all elections of City Council members, including their recall, and for filling any vacancy in a City Council office. 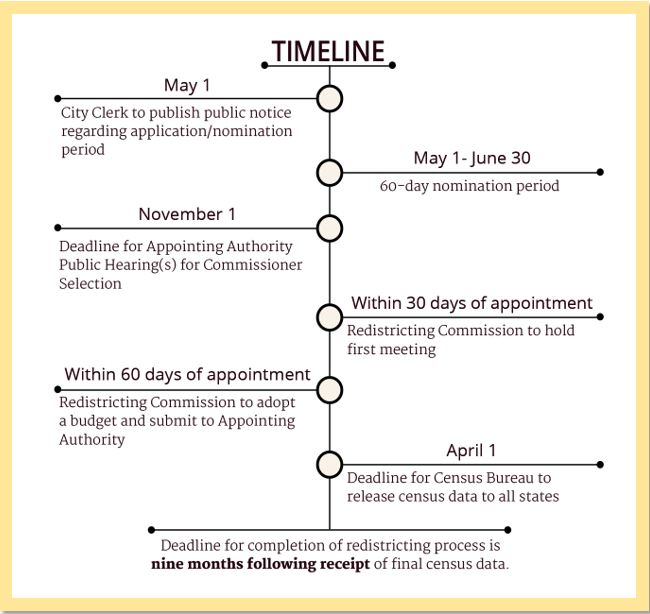 The San Diego City Charter requires the creation of a Redistricting Commission at the beginning of each decade. It has the sole and exclusive authority to adopt plans which specify the boundaries of districts for the City Council. The Commission consists of nine registered voters of the City of San Diego, as stated in City Charter section 5.1.

The Commission must hold at least nine (9) public hearings, however often times they far exceed that number,  in various geographic areas of the City before it prepares its preliminary redistricting plan. This preliminary plan will be filed with the City Clerk, along with a full analysis and explanation of the Commission’s decisions, no later than 30 days before the adoption of a final plan.

Once the preliminary plan is filed, the Commission must hold at least five (5) more public hearings in different geographic areas of the City before it can adopt its final plan.

The final plan will be effective 30 days after the Commission adopts, but the final Redistricting Plan shall not be adjusted and effective until after the next regularly scheduled general election for Council seats following the redistricting. However, it is subject to the right of referendum.

Applicants need to be geographically, socially and ethnically diverse. They must also have demonstrated impartial, non-partisan leadership. During the application/nomination process, they must submit a 300-word statement regarding their qualifications; this is in addition to the application. Applicants are subject to a background check by the San Diego Police Department and must submit their Social Security Number for this purpose, if requested by the Clerk. All sensitive information is kept confidential. Additionally, all applicants will be required to submit a Statement of Economic Interests (Form 700) to disclose personal assets and income; this form will be submitted electronically via the City Clerk’s Electronic Filing System and is a public document.

Following the application and the 60-day nomination period that commences May 1, 2020, the Appointing Authority, a panel of three (3) retired judges, selects a panel of nine (9) Commissioners and two (2) alternates who make the Redistricting Commission geographically, socially and ethnically diverse. Each successful appointee must have a high degree of competency to carry out the responsibilities of the Commission; and have demonstrated their capacity to serve impartially in a non-partisan role.